Skip to content
How to setup a TurtleCoin Mining Pool


Cryptocurrency miners will "pool" their GPU resources ("hashpower") into aggregate "mining pools", so that by the combined effort of all the miners, the pool will receive a reward for the blocks "mined" into the blockchain, and this reward will be distributed among the miners. 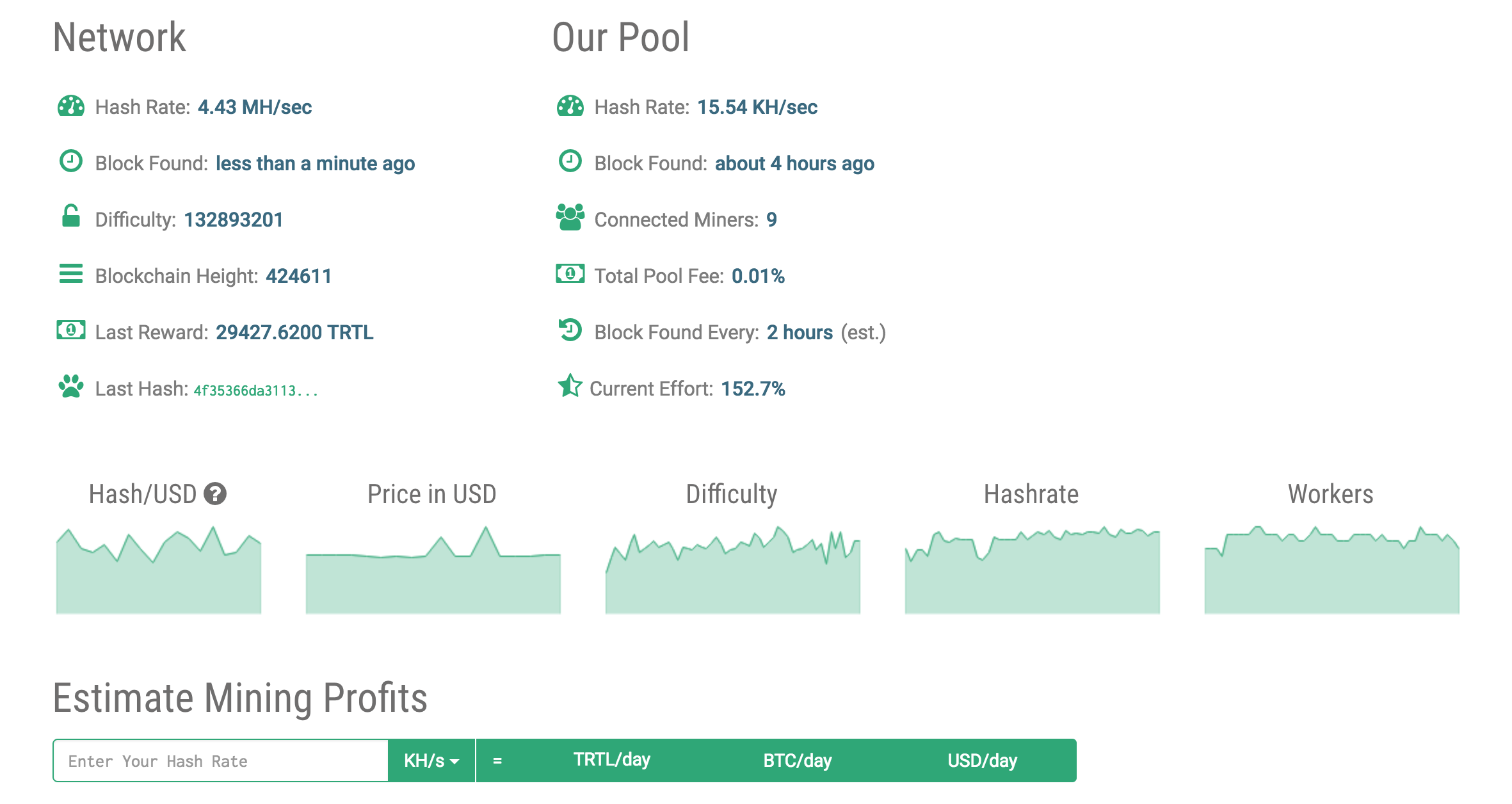 This recipe illustrates how to build a mining pool for TurtleCoin, one of many CryptoNote currencies (which include Monero), but the principles can be applied to most mineable coins.

The end result is a mining pool which looks like this: https://trtl.heigh-ho.funkypenguin.co.nz/

WTF is a TurtleCoin and why do I want it?"

In my opinion - because it's a fun, no-BS project with a silly origin story, a friendly, welcoming community, and you'll learn more about cryptocurrency/blockchain than you expect.

The TurtleCoin pool elements won't (and shouldn't) run as root, but they'll need access to write data to some parts of the filesystem (like logs, etc).

To manage access control, we'll want to create a local user on each docker node with the same UID.

The pool uses Redis for in-memory and persistent storage. This comes in handy for the Docker Swarm deployment, since while the various pool modules weren't designed to run as microservices, the fact that they all rely on Redis for data storage makes this possible.

Be aware that by default, Redis stores some data only in memory, and writes to the filesystem at default intervals (can be up to 5 minutes by default). Given we don't want to loose 5 minutes of miner's data if we restart Redis (what happens if we found a block during those 5 minutes but haven't paid any miners yet?), we want to ensure that Redis runs in "appendonly" mode, which ensures that every change is immediately written to disk.

We also want to make sure that we retain all Redis logs persistently (We're dealing with people's cryptocurrency here, it's a good idea to keep persistent logs for debugging/auditing)

Create directories to hold Redis data. We use separate directories for future flexibility - One day, we may want to backup the data but not the logs, or move the data to an SSD partition but leave the logs on slower, cheaper disk.

Create /var/data/turtle-pool/redis/config/redis.conf using http://download.redis.io/redis-stable/redis.conf as a guide. The following are the values I changed from default on my deployment (but I'm not a Redis expert!):

I also had to disable the following line, by commenting it out (thus ensuring Redis container will respond to the other containers):

We'll run a simple Nginx container to serve the static front-end of the web UI.

The simplest way to get the frontend is just to clone the upstream turtle-pool repo, and mount the "/website" subdirectory into Nginx.

Edit /var/data/turtle-pool/nginx/website/config.js, and change at least the following:

The first thing we'll need to participate in the great and powerful TurtleCoin network is a node. The node is responsible for communicating with the rest of the nodes in the blockchain, allowing our miners to receive new blocks to try to find.

As of June 2018, the TurtleCoin daemon is not what you'd call "stable". Certain known circumstances (like unusual blocks) can cause the daemon to crash, and permanently corrupt its stored blockchain data. When (not if) this happens, the only solution is to delete all the stored blockchain data, and allow the daemon to resync (from checkpoints and then from other nodes). This resyncing process takes time, during which your miners can't mine. To partially mitigate this risk, we run 2 extra copies of the daemon, which we'll then start/stop at alternate intervals, so that in the event of a corruption of the daemon's data, we have hopefully-safe recent copies of the blockchain, allowing us to recover and restore quickly.

Create directories to hold the blockchain data for all 3 daemons:

Create cron entries (in /etc/cron.d/turtle-pool-failsafe) to start/stop the failsafe daemons:

Our pool needs a wallet to be able to (a) receive rewards for blocks discovered, and (b) pay out our miners for their share of the reward.

Now create the initial wallet. You'll want to secure your wallet password, so the command below will prompt you for the key (no output from the prompt), and insert it into an environment variable. This means that the key won't be stored in plaintext in your bash history!

After having entered your password (you can confirm by running env | grep PASS), run the following to run the wallet daemon once, with the instruction to create a new wallet container:

You'll get a lot of output. The following are relevant lines from a successful run with the extra stuff stripped out:

Now create /var/data/turtle-pool/pool/config/config.json, using https://github.com/turtlecoin/turtle-pool/blob/master/config.json as a guide, and adjusting at least the following:

Send logs to /logs/, so that they can potentially be stored / backed up separately from the config:

Set the "poolAddress" field to your wallet address

Add the "host" value to the api section, since our API will run on its own container, and choose a password you'll use for the webUI admin page

Set the host value for the daemon:

Set the host value for the wallet, and set your container password (you recorded it earlier, remember?)

Set the host value for Redis:

That's it! The above config files mean each element of the pool will be able to communicate with the other elements within the docker swarm, by name.

Launch the Turtle pool stack by running docker stack deploy turtle-pool -c <path -to-docker-compose.yml>, and then run "docker stack ps turtle-pool``` to ensure the stack has come up properly. (See troubleshooting if not)

The first thing that'll happen is that TurtleCoind will start syncing the blockchain from the bootstrap data. You can watch this happening with docker service logs turtle-pool_daemon -f. While the daemon is syncing, it won't respond to requests, so walletd, the pool, etc will be non-functional.

You can watch the various elements of the pool doing their thing, by running tail -f /var/data/turtle-pool/pool/logs/*.log

So how do I mine to it?¶

That.. is another recipe. Start with the "CryptoMiner" uber-recipe for GPU/rig details, grab a copy of xmr-stack (patched for the forked TurtleCoin) from https://github.com/turtlecoin/trtl-stak/releases, and follow your nose. Jump into the TurtleCoin discord (below) #mining channel for help.

What to do if it breaks?¶

TurtleCoin is a baby cryptocurrency. There are scaling issues to solve, and large amounts components of this recipe are under rapid development. So, elements may break/change in time, and this recipe itself is a work-in-progress.

Jump into the TurtleCoin Discord server to ask questions, contribute, and send/receive some TRTL tips!

Two possible solutions to this are (1) disable banning, or (2) update the pool banning code to ban based on a combination of IP address and miner wallet address. I'll be working on a change to implement #2 if this becomes a concern.